Initial contact received (this is a case freom Ireland):

This can’t be right. I’ve just had a bet cancelled (ew double) by ********** within 10 minutes of it being accepted. The only reason I can think of is that one of the horses was backed a few minutes after I placed my bet. I chose the horses myself. On ‘live chat’ they won’t tell me why the bet was cancelled.  Just the usual trader nonsense. I think they have broken the law, what can I do?

Based purely on what you say they probably have.  Please can you let me have the live chat text and I’ll follow it up with the Gambling Commission if you provide written permission for us to do that.

NB: Due to the timescale nothing could be done before the horses ran as ********** flatly refused to reverse their decision despite concerns about them breaking UK gambling regulations and law.  Not important, but the bet lost.

A couple of days later after receiving permission:

J4P sent an email to the Gambling Commission and received this reply the same day:

A contract is legally enforceable, and a gambling contract is no different in that respect (ref s335 of the Gambling Act). There are some legitimate T&Cs that would permit an operator to void a bet, but it would be reasonable to expect the operator to explain what T or C they are invoking. It sounds like a poor show from the Live Chat operative. Have you looked at the T&Cs for the operator concerned?”

I have and they are of great concern.  When you haven’t been given a clue where to look it’s a big job, but I tried to find something.  I think I have; apparently the wording of this sub-section on the **********’ website is new.

8.1 Where we believe we have reasonable grounds to act upon suspicious and / or unusual betting patterns, as defined and outlined below:

8.1.1 A maximum pay out of *10,000 will apply irrespective of the sport type. This is including but not limited to all bets featuring Irish races Non listed / Premier handicaps; Non Graded, Non Group races; UK Races Class 4 and below.

8.1.2 We have the ability / authority and control, to cancel or void all bets deemed by ********** to be suspicious or activate any other policy regarding accounts as covered in general Terms and Conditions.

8.2 Exercising these rights allows us to protect against any suspicious betting behaviour, enabling us to treat all customers fairly and rightfully in line with all integrity issues, fair play and competition of events.

On the face of it if you were a long term ‘fun’ punter you wouldn’t have too many worries about this wording, e.g. Don’t have inside information, fed up of backing horses that you know won’t win by the ‘off’ due to odds movements (increasing) and/or that your chances of winning are much smaller than you thought due to a gamble on a particular horse with little apparent form.

But and it is a big but, there are so many unscrupulously ways ********** can take advantage of the above when their traders (as all companies do) refuse to give a reason why a bet has been cancelled before the event or voided after the event.

As an example I backed a horse yesterday that was 14-1 in the morning, which returned 9-2 at SP.  I had chosen the horse purely on my own form and time study.  8.1 bullet point 3 could invalidate that bet (and many others at the sole judgement of **********).

Bookmakers want to take bets from the ‘right people’, but that does not give them the right to then cancel bets when they realise a bet or bets might not be from their definition of ‘right people’.  There is also a big chance of ‘fun’ punters who study being caught in the cross-fire.

I hope this helps, but do come back to me if you need more.

The punter sent the ‘live chat’ and provided permission for us to use it: 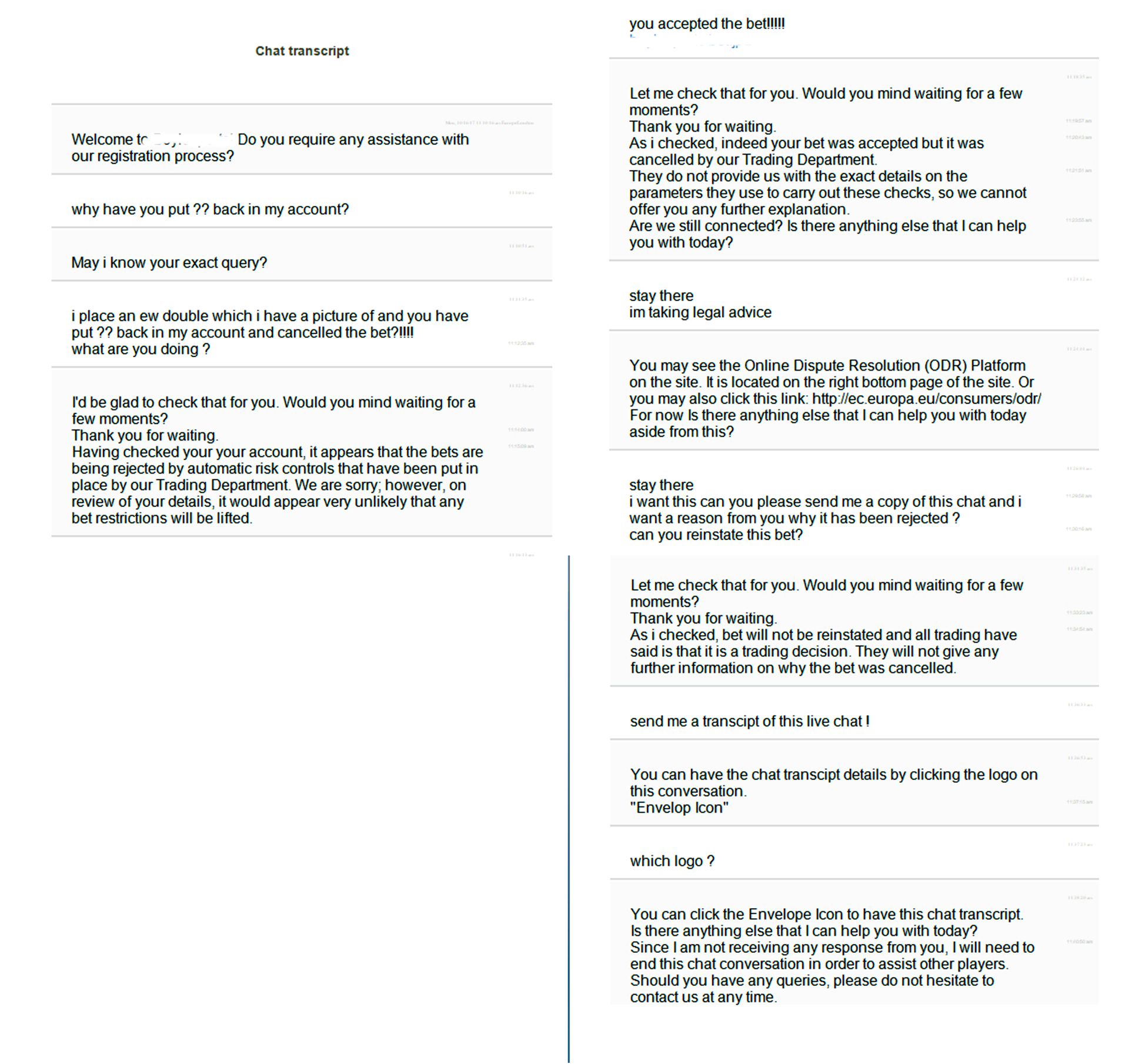 This case is solved, but not solved – what you may ask?

It is solved in that the bet lost, so the punter has cash they would have left in the care of **********, but conversely it is not as nobody knows why ********** cancelled the bet, thus possibly breaking UK regulations and law, because they refused to provide an acceptable reason, under UK law, for their actions.

J4P is guessing, but based on the bet being an ew double and one horse shortening in price within a few minutes of the bet being placed we think ********** may rely on one or both of the following T&Cs if pressed:

But, to be honest we haven’t a clue.

The ‘Gambling Commission’ has confirmed they, “Have added the information to their evidence base,” which in our experience means we will hear nothing more unless something appears as a press release that refers to an in-depth investigation that found ********** has broken UK regulations.

J4P cannot prove this, but we suspect ********** will carry on their merry way, interpreting UK regulation and law as they ‘see fit’ and there may be an outside chance that a press release may appear 4-12 months from now stating they’ve been fined, but much more likely is; it won’t.

We are, therefore left with a totally unacceptable state of affairs.  How difficult is it for the regulator to insist that all gambling companies licensed by them must provide a reason or reasons for cancelling a bet, which could then be challenged at arbitration or, if needed, in a court of law.  They could also say that companies who do not do this will face a fine: Not ‘rocket-science’.