On 30/06/2022 two of racing’s media behemoths took to Twitter with hugely opposing views on one hot topic: 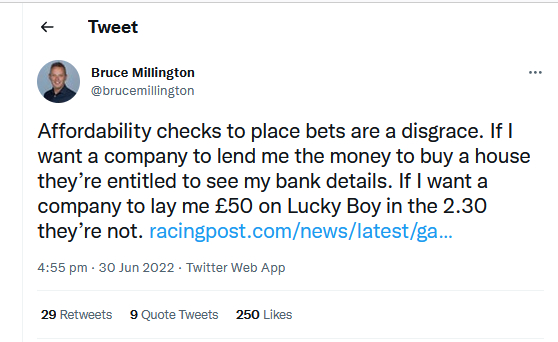 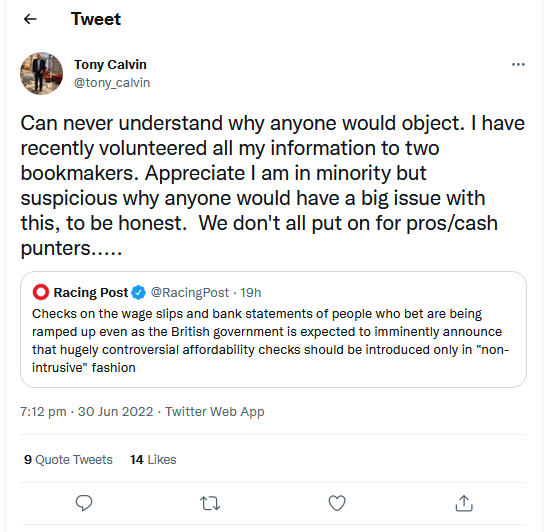 ‘Cards on the table’ from me: Around 7-8 years ago I refused to stand next to my passport photo-page and take a selfie to obtain £40.00 from a gambling company that no longer trades in the UK, so there is no chance of me providing full details of my bank account transactions and/or my income/wealth to a gambling company.  For me, the issue has become pretty academic, as I rarely bet now, so I could use a betting shop if the issue became a problem for me, because the proposals primarily concern online gambling.

I no longer bet regularly for many reasons, but this blog isn’t about those things.  It’s about affordability to gamble and specialist media coverage of this and the forthcoming gambling review white paper.

Over the last six years J4P has helped customers gain access to £2.75 million that was either winnings being withheld from them or refunds following exploitation (some journey, including the tragic death of Paul Fairhead).

Unlike most people interested in racing and many, many others J4P has a pretty good insight into how some UK licensed gambling company’s trade.  Hopefully, this means J4P is in a good position to recognise why we are where we are.  In J4P’s opinion, with a few exceptions, racing media has been appalling at covering why we are where we are in the lead up to the launch of the gambling review white paper.  Some media outlets have become a constant mouthpiece for the Betting and Gaming Council (BGC), without any sense of recognising that the BGC has become part of the reason that we are where we are.  A quick ‘heads-up’ that J4P hopes isn’t needed – the BGC is a lobbying organisation for the gambling industry, so by definition is not the punter’s friend.

Five years ago a BBC senior presenter said to me that the behaviour of the regulated gambling industry in the UK couldn’t continue for much longer.  She compared its actions to that of the payday loan industry, e.g. it trades unfairly and exploits some of its customers.  We all know what happened to that industry.  In effect, the government put some of the major players out of business overnight.  The presenter thought this might happen to some gambling companies, if significant change wasn’t forthcoming.

The gambling industry and the media who cover the industry, like racing media, have had plenty time to explain why we are where we are, which may have avoided the likely introduction of stricter affordability procedures within licensing rules, but they haven’t, often preferring the ‘lifting the carpet and sweeping’ approach, ps: Source of income checks are not new, which seems to have got lost in the atrocious coverage.

What was the BBC presenter talking about?

How all this fitted into fulfilling the objectives of the 2005 Gambling Act is likely beyond any reasonable thinking person:

1.21 The three licensing objectives (s.1 of the Act) which guide the way that the Commission and licensing authorities perform their functions and the way that gambling businesses carry on their activities, are;

1.22 The Commission and licensing authorities have a duty to pursue the licensing objectives, and we expect gambling business to deliver them.

On any reasonable measure the UK has failed to meet all of these objectives.  Nobody who was sensible expected 100% success, but the failures have been spectacular by any standards.

This Mr Millington and Mr Calvin is why we are where we are.  Whether you agree on affordability checks or not there is no question that the UK has had an out-of-control regulated gambling industry, which specialist media could and should have exposed in far higher profile ways.

Over the last six years J4P, but mainly me, as Paul was a much nicer bloke than me, have been called many things, one is relevant here, e.g. ‘punter sympathiser’.  I will repeat again as I have done many times, a tiny proportion of punters do not trade fairly and even more rare is those who trade illegally.  J4P does not and never has sympathised with these punters.  Punting however, isn’t a government regulated industry, so the only ‘standards’ are personally set ones, thus meaning some punters will fail the standards expected of them.  Conversely, in the case of UK gambling licensees it has been a failure of the whole ecosystem.  Of course this does not mean all licensees have been trading unfairly or unsafely, it simply means that enough have to drive the position of where we are now.

I suspect the gambling industry, and most of the people who cover it and/or benefit financially from it never thought we’d be where we are now?   J4P tried to tell people that not being able to bet if you win and gambling disorder were linked.  Most ignored us and some actively told us we were wrong.  We were correct, the failures on social responsibility are having an effect now and may have a far greater impact in the future on many, many punters, not just those who win.

How many of those who win would be moaning if there was a minimum bet (liability) law (MBL) in place, where winners or those profiled as potential winners could bet up to a certain liability without any concerns of being asked for bank statements?  I suspect not many, but punters need to look to themselves on that one.  For many, it was easier just to carry on buying identities, for others like the racing media it was easier to keep quiet or at best mention stake restrictions extremely rarely, than fight for a MBL.

Punters needing to look to themselves could be a theme on a number of topics, but a few people have much more power than individual punters, so have a far greater chance of making an impact in the ‘corridors of power’.  I would include some working in specialist media as being in this more powerful group, so in J4P’s opinion having a responsibility to fight for transparency in order to improve fairness and safety.  In a democratic country, media is supposed to cover what is happening and this includes multi-media that punters help fund, and where, there would be no advertisers or sponsors if those punters disappeared be that enforced by regulation or personal choice.  Not all media outlets or people within those outlets, but many, easily a majority, have let punters down over the last decade, so please don’t come belly-aching now when ‘lifting carpets and sweeping’ may now contribute to something that might directly affect you.  As already stated, others have suffered injustices when betting on sports for years that specialist media has rarely covered, e.g. being asked for very intrusive personal documents when withdrawing.

J4P has tried to do our bit without ‘fear or favour’ and without ‘taking the pound’, including a submission of over 20,000 words to the DCMS review (all referenced to evidence where possible), but it’s unclear whether our views on improving a legal, regulated gambling industry, whilst continuing to provide access to sports betting without undue personal intrusion will have made any difference, e.g. will there be a new independent ombudsman with statutory powers, including the ability to rapidly rule on consumer complaints and levy substantial fines for individual cases where relevant?  HELLO, this whole saga is about money.  If regulation stops licensees making money from acting inappropriately that behaviour will stop, so clearly decide what is unacceptable, act on it and life will be much simpler for all concerned.

We need to see the detail about the white paper rumours before we know what the future holds, therefore unlike some, this blog will not be making, as yet, unfounded claims of a doomsday scenario.  J4P suspects, yes only suspects, that UK licensed gambling companies will survive, probably in smaller numbers, that racing will survive, and most punters will continue to bet on sports in traditional ways without noticing change of any sort.  But, what will happen for professional punters, traders, and those who specialise in using bonuses as a source of income is a different matter.