We keep mentioning that off-course bookmakers close the accounts of ‘fun’ punters.  The bookies PR machine tries to deny this and we feel they are succeeding with their lies as we believe the UK Gambling Commission (UKGC) believes them and not us.  Of course the bookmakers get to meet the UKGC staff ‘face-to-face’ on a regular basis, whereas we (the customer) do not.  We think the UKGC is there to protect the customer, but when you consider the last sentence does it appear that ‘access’ for presenting a case is fair: Of course not.

The two screen grabs that follow show the full and complete betting history of a ‘fun’ punter.  What else can he be, when the largest stake placed is £12.50.  After his bet on Rory Mcilroy only his 19th bet at an average stake of under £10.00 his account was blocked, closed and his deposit balance returned.  He has no right of appeal, or no right to be told why this has happened.

How is this punter a danger in any significant way to a multinational company’s profit?  This is simply pure greed and an example that the UKGC is an absolute joke.  We have numerous letters and emails from the UKGC stating this type of bookmaker behaviour is OK with them, i.e. It is fine for off-course bookmakers only to deal with people who they deem will lose.  Converse text, but exactly the same thing; if you think you are going have an account with an off-course bookmaker and make anything in the medium term, even just betting in fivers and tenners, think again.

These companies are not bookmakers in the true definition, they are licensed to take money off people.  Is this ‘fair and open‘? 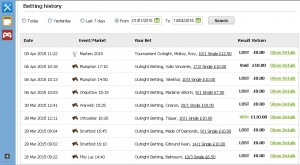 The whole thing is a joke!