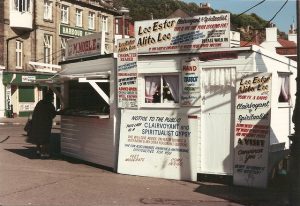 For those of you who visit Whitby you’ll recognise this picture.  Our roving reporter can reveal that the clairvoyant helps three well known horse racing tipsters regularly.  She has decided to ‘spill the beans’ as she is aware that TV and sporting papers are promoting their advice as being profitable and she thinks she should get a percentage (you’ll be lucky).

All three have connections with Yorkshire, but she usually provides their tips for them using a crystal ball on Skype every evening.  She claims to see all three personally around twice per annum.

Initially, she thought the first guy was a vicar, because he was always going on about ethics and morals.  The only female is said to be petite, requiring only one tip per day unless there is a non-runner.  The third fellow is her favourite though, as she thought he was a window cleaner until she realised he never had any water in his bucket.  She then thought he was a wildlife photographer as he kept talking about being up at dawn and watching animals.  She still finds it difficult to work out exactly what he does.

Like the tipsters she doesn’t reveal how much she makes or loses from the advice she provides, but she certainly feels she should be entitled to a percentage of the fees the two males charge.

Her crystal ball usually reveals a very amusing man with a beard who liked a bet (a big bet), but on occasions due to the highly priced red wine he’s drinking in heaven he is incapable of providing tips.  When this happens she consults the local Whitby Gazette and just chooses a couple of first and second favourites at random from the racing section to pass on to all three.

Our reporter asked her what the future would hold for him.  Her response, “Be very careful of anyone who provides horse racing tips, but does not reveal their profit and loss figures.”

We can’t fault that.

Categories: Uncategorized & humour with no evidence
| Tags: be careful, tipsters